Michael Nicholson had difficulties and poor attendance in public school, and dropped out without achieving any high school credits. “In 2003, I took a GED test and passed. I thought this would be enough for an education credential, but I couldn’t have been more wrong.”

Many years later, Michael started repairing cell phones and computers mostly as a hobby and wanted to learn more. “I looked into the Electronic Engineering Technician program at NSCC to expand on my ability to repair phones and computers, but I didn’t have the required academic math credit.” Michael paid for a correspondence course in July 2018 and spent many hours looking up information on how to get started. “When it came down to it, I couldn’t get even the first assignment done.”

In November 2018, Michael had an injury and was laid off work. He saw an ad for the Electronic Engineering Technician program at NSCC. He called them, was interviewed, and accepted into the Adult Learning Program. “Since starting ALP, I have already completed grades 11 and 12 academic math and am advancing very quickly in all my other courses. I plan to graduate with honors this semester, and have been accepted into the Electronic Engineering Technician program at NSCC Kingstech starting in the fall.”

“Mike started the Adult Learning Program at NSCC Kingstec in January,” says his teacher Trevor Capern. “He has blown away his instructors with his determination, ability, and progress towards his educational goals. Mike came to us needing all 12 credits to complete his diploma, and when he finishes this year, he will be the first learner in the
history of the program to accomplish the feat in such a short time span. I have no doubt that Mike will continue his educational journey and achieve all his goals.”

Michael has been selected as the Valedictorian for the School of Access /School of Trades and Technology graduating class of 2019.

“I decided to make a phone call to NSCC and go in for an interview. This was the best thing I could possibly have done.” ~ Michael Nicholson 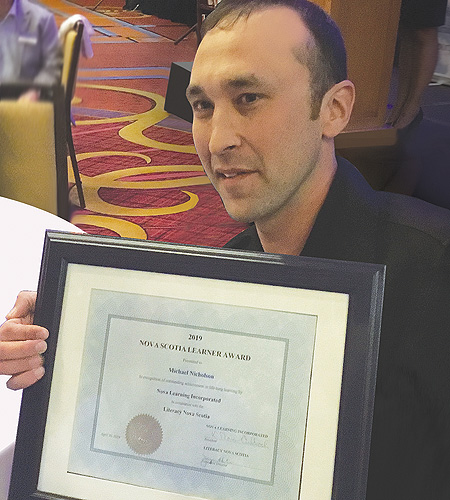