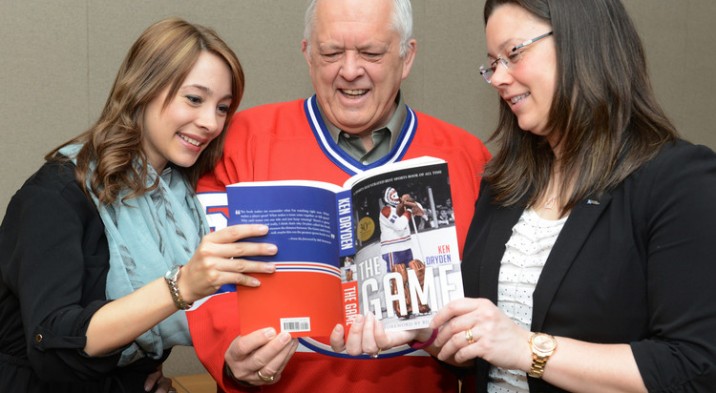 Between his impressive NHL career and his time in politics, Ken Dryden is a name most people in Canada recognize.

Now the Hall of Fame goaltender is coming to Fredericton as the guest speaker of the second annual Peter Gzowski Invitational Literacy Dinner presented by KPMG, taking place on Monday, April 13, at the Delta.

“Everyone who knows him, loves him,” says Bob Scott, chair of the second annual PGI Literacy Dinner. “He’s a big draw.”

Dryden is interesting because there are so many sides to him. In addition to his renowned NHL career in which he won six Stanley Cups in eight playing seasons with the Montreal Canadiens, he was also president of the Toronto Maple Leafs from 1997 to 2003. He was a Liberal member of Parliament from 2004 until 2011 and was a cabinet minister from 2004 until 2006.

He’s also the author of several books. Though most people know of The Game, the book that makes him such a great fit for this event is In Schools: Our Kids, Our Teachers, Our Classrooms.

“He’s done tours of the country talking about the education system. It’s all interlinked. If they don’t get the basis in school, then chances are they won’t be successful,” says Scott. “He’s well-spoken, he knows how important (literacy) is, he didn’t hesitate at all when we asked him to come here to be the guest speaker.”

Though he’s the main speaker at the event, Premier Brian Gallant and Shelagh Rogers, host of CBC’s The Next Chapter and chancellor of the University of Victoria, will also be taking part.

“I think that when people leave here the night of the 13th, they’re just going to be mesmerized by all that goes on,” says Scott, adding, “The adult learners always tug at my heart.”

Also worth noting, Marshall Buttons is returning as the event’s emcee, says Natasha Bozek, executive director of the Literacy Coalition of New Brunswick.

The reason behind the event is a desire to improve literacy in the province.

“Unfortunately, the scores aren’t great and they’re not getting better.”

There are no easy answers as to why this is the case.

“On the adult literacy side of things, what has been difficult is we’ve been so natural resource-based and a lot of people didn’t need to finish school to be able to do those jobs, to get paid well and take care of their families. We still have that group of individuals that are part of the statistics,” says Bozek.

That is only part of the issue, however.

“Right now on the adult side of things we’re hovering around 50 per cent. A little over 50 per cent of the population are not functionally literate.

“So they’re not illiterate, but they’re not functionally literate in the sense that they can do some things, like maybe read a menu or read a sign, but they struggle to be able to do daily literacy related things,” she explains.

“At the school level, our literacy and math scores have been declining unfortunately. The aim is to hit 90 per cent of kids reaching grade level, and for literacy we’re more in the 70s in general and in math it’s in the 50s and 60s.”

She says these are all lumped together in essential skills, as they are things we need to use on a daily basis.

“That’s what we’re trying to focus on. Essential skills is the new buzz word. Literacy has had so much negative connotation for so long, so we have talked more about essential skills – reading, writing, numeracy, how to read and use documents, how to use computers, being able to work in a group with other people productively, team-working skills,” says Bozek.

“It’s really looking at more of a full picture, not just reading and writing.”

The PGI Literacy Dinner is a great way for people to support positive change in this area, while enjoying a great evening with Dryden, as well as having the change to take home some great items from the silent and live auctions.

“One of the live auction items we’ll be auctioning off that evening is another lunch with the premier. It was a very successful item last year. There will also be a Ken Dryden jersey that Mr. Dryden will sign for the person who wins the item right there on the spot,” says Scott. “We’ll have a number of his books that he’ll also sign personally.”

He says that they’ve got a couple of other major items planned for the live auction, but the organizers are keeping them under wraps for the moment.

The Second Annual Peter Gzowski Invitational Literacy Dinner presented by KPMG in support of the Literacy Coalition of New Brunswick is taking place on Monday, April 13, at the Delta Fredericton.

The reception begins at 6 p.m. and will feature entertainment by two members of the New Brunswick Youth Orchestra, Sienna Cho and Chris Murray. The dinner will begin at 6:45 p.m.

NHL Hall of Fame goaltender and author Ken Dryden will be the guest speaker at the Second Annual Peter Gzowski Literacy Dinner, taking place Monday, April 13, at the Delta Fredericton. PGI chair Bob Scott, shares a look at Dryden’s book The Game with Katelyn Kelly, left, PGI cabinet chair, and Natasha Bozek, executive director of the Literacy Coalition of New Brunswick. All proceeds from the dinner will go to fund LCNB projects.